One of the reasons why I moved to Penang in 2003 to teach at USM is George Town. Luckily for me, for the past few years, George Town is rejuvenating and changing (hopefully in a good way). If u think u know everything already about George Town (to be its 'mafia' like citizen, who also makes it interesting too!), you are wrong.

George Town is more than all that info on popular 'touristic' and 'heritage-bend' fliers, leaflets, handouts, posters, brochures, billboards, and all the mainstream media apparatus. You may feed yourselves with all those info (they are very helpful indeed, don't get me wrong), but the more you let yourself 'lost' in George Town, the more hidden treasures you will discover.

By my bias standard and casual encounter for the past 9 years, George Town is more than those glossy narratives of George Town propagated for many different agendas. It is a city full of post-modern ironies and paradoxes (which is why I like it so much). Other than Langkawi Island, George Town  has also become my 'cultural text' to study and scrutinize (which include 'me' in it, sort-of a self-reflective mode on scrutiny).

Other than the celebrating semiotics, George Town is also partly rugged, rustic, old, archaic, ignored, dilapidated, abandoned, forgotten, veiled, marginalized, sidelined, hidden, ruined, ugly, dirty, smelly and neglected. It is also being rapidly bought-over and creatively re-interpreted. Hidden underneath the glossy festival celebration and master-narrative of UNESCO are clashes of semiotics, variety of interpretations (of how to go on with the economically challenging life and survival issues).

For the coming few weeks, everything seems to be echoing a 'celebration' mood, everything, even 'walking' can be a claimed to be part of the festival. But, as we celebrate George Town, as we 'get high', we also need to 'get real'. It is not all beds and roses.

George Town has its own fair share of 'problem statements' too. There is this lingering 'kolotnial' centric that needs to be balanced by other 'centrics', especially those related to 'other' non-Euro-centric narratives made obscured by the larger, dominant and more popular discourses on culture and heritage. Then there is also this cliche claim of marginalization as far as the other minorities are concerned (and their own 'centrcism' - versions of historical narratives, economic, cultural, social and political survival). In this regards, yelling blames at 'others' during closed seminars or conferences, or even by the streets, will not contribute pro-actively to anything. But that is my 10 cent. I'm no expert on culture and heritage.

Another cliche problem statement is the splitting dichotomy of 'getting high' (preserving our shared multi-cultural history, culture and heritage in George Town) vs 'getting real' (make a lot of money and get rich!).  In the midst of such dichotomy, there is a danger of few sections of the society would probably be left out, economically, politically, socially, culturally, historically.

Then there is this pressing issue of sustainability and the environment. But I strongly believe that the majority of the people of Penang, if not George Town dwellers, are more than capable of dealing with these 'getting real' issues.

Another thing about George Town that I like so much is (ironically) its fair share of annoying people (by my bias standard, of course!). Yet, they are also unpretentious, straight-talking, strong-minded, strong-willed, highly committed or dedicated for a certain cause (heritage, environment, sustainability, arts and culture for example).

These characters, notwithstanding their sometimes annoying posturings, have significantly contributed and made George Town unique and interesting.  In fact, Penang is also known for its dynamic NGOs, its 'leftist thinkers', its 'community-driven activism' and critical (if not creative) people. Most are also ready to debate or simply quarrel like all hell broke loose, but still 'real' enough to accept that such 'differences' of opinions, ideologies, takes etc, are a part and parcel of a dynamically changing democratic society.

Of course, they are also those gangster types who simply like to ignore the importance of expressing dissent and disagreement in a civilized way, like burning books, verbally abusing and physically threatening others, kicking other people's asses, etc. Instead of learning from each other or to take charge by focusing what one (or one's group) can contribute to George Town, they focus on blaming what they take as 'other people'. But I suspect (and hope), such type is increasingly becoming a tired cliche that will not survive the 21st. century.

The following are pictures of selected sketches/studies done by the 1st. year students of New Media Technology, School of the Arts, USM for their Cross-cultural Design course. Yaa, they are no 'internationally-acclaimed' super-star artists, but I believe that these are their honest reflections and interpretations of George Town. I had a good time 'listening' and 'witnessing' to their interpretations of George Town (rather than listening to my own voices giving them tiring lectures on design, arts, culture, heritage bla, bla, bla.....) 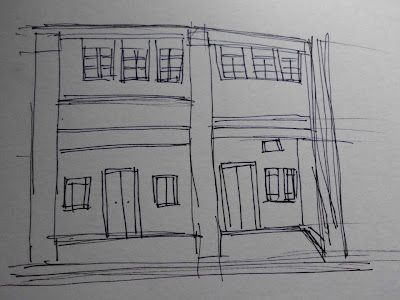 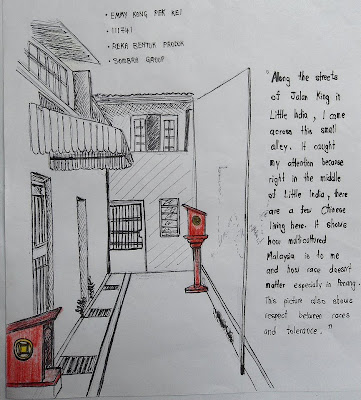 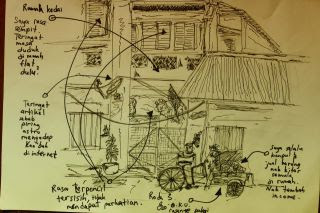 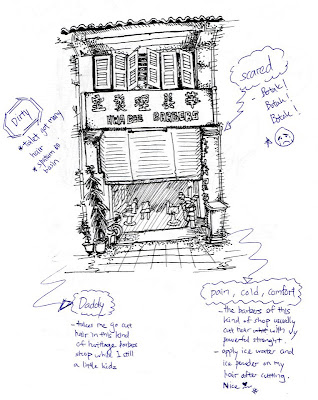 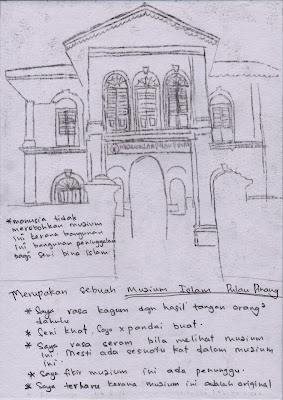 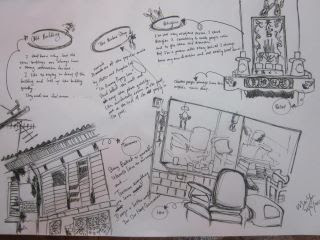 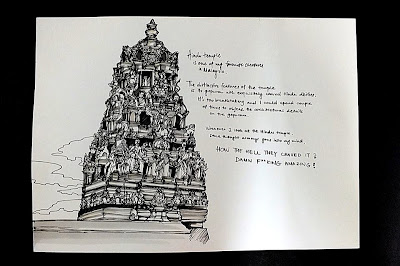 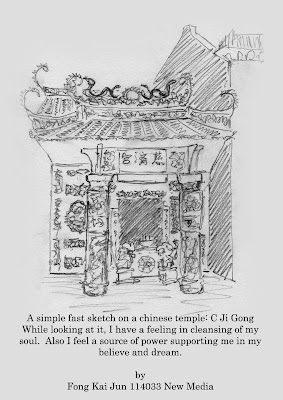 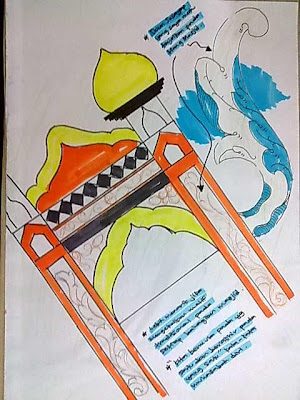 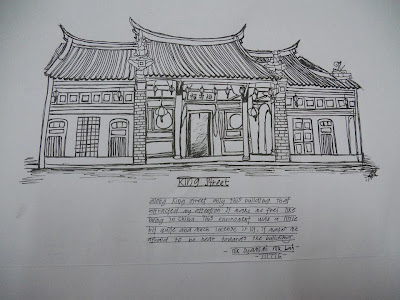 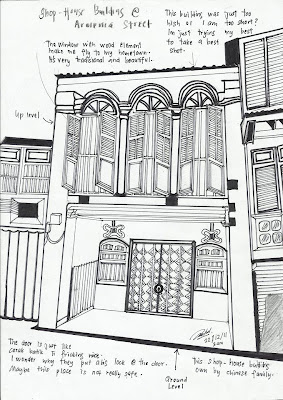 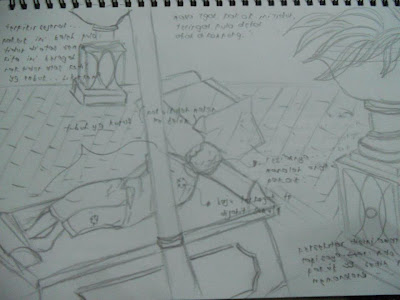 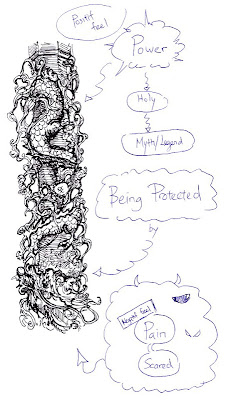 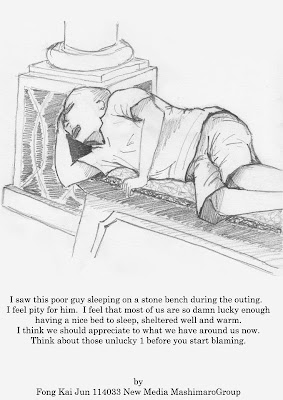 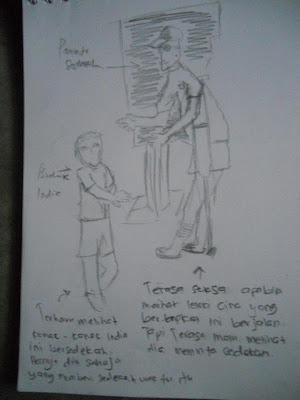 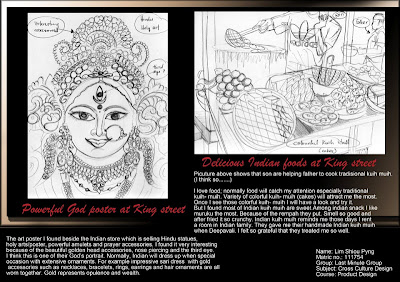 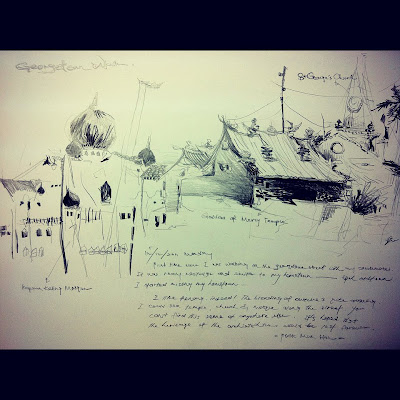 For accompanying essay on the above works, click :
http://hasnulsaidon.blogspot.com/2011/12/reflections-of-george-town-through-eyes.html


For those 'intellectual' type who likes to dwell in 'theories and conceptual frameworks', the following is an excerpt from my previous blog entries that I think is pertinent in 'reading' George Town.

For those who are not interested to 'burden' their minds, well.....Happy George Town Festival!!

The excerpt from previous blog entry.
In this space, culture, tradition and heritage may not anymore taken as a fixed or progressing phenomena (in a linear sense), but as all things produced by human intervention, especially ideological. Cultural space may increasingly be taken as an open arena of contestation and change while the value of cultural objects in the whole spectrum of cultural production may begin to be permeated by the conditions of economic exchange. Cultural production of objects, including design and the visual art, may growingly become ‘myth creations’ especially if it is meant to universalize and make the engagement with such objects seem natural to human experience. Meanings that such myths induce may not necessarily be natural at all, instead constructed to serve particular interests of a controlling culture and dominating discourse.

It is a space that acknowledges how language (including design and the visual art) does not only mirror an object, but constructs and constitutes it. It acknowledges that all cultural forms including design, can be analyzed like a language, especially in regards to identity. The discourse of identity is held to be social and discursive construction.

It is a space where language, meaning and identity are unstable and not fixed. They are nevertheless regulated and temporarily stabilized in social practices into pragmatic narratives. It is a space where meanings are relational and formed within what is termed as ‘language games’ (how ways of speaking about a topic are regulated or controlled).

It is a space where signifying practices produce multiple identities. Meanings attached to a particular design product for example, are produced symbolically through signifying practices of language and representation. Similar to meanings in language, identities are produced by active human agents. Consequently, the space entails a process of ‘listening to people’, instead of ‘talking to’.

The many notions of self, both personal and collective as well as cultural are growingly narrated by the active public at large, not just a small number of so-called ‘experts’ or ‘specialists’. The many notions of self-identity are not necessarily given, universal, homogenous, fixed and frozen, but are rather performed and appear to be in a constant state of ‘becoming’.