From the following blog entry
http://hasnulsaidon.blogspot.com/2012/05/inspiring-albukhary-international.html

Following our initial visit to the inspiring Al-Bukhary International University's (AIU) in Alor Star few weeks ago, as well as a generous night tour by its VC, Tan Sri Dato' Prof. Dzulkifli Abdul Razak, we were requested to propose a brand concept and image, operational structure, curatorial paradigm and conceptual  framework for AIU's future initiatives in informing, communicating, interfacing and engaging its stakeholders (students, admin staffs, general public, etc) with its vision and mission, its core values and propositions, be them tangible or intangible.

We were also requested to propose a comprehensive, sustainable and modular exhibition system for AIU.

Three immediate extensions of the proposal would be in the forms of a multi-dimensional and interactive exhibition and two murals. The exhibition will be at a space we refer to as AIU Triangle, while the two murals will be placed at another space called AIU Corridors.

The proposed exhibition is called "Ripples and Reflections of AIU" while the murals are called "Humaniversity", AIU's tagline itself.

We took the request as an honor as well as a challenge or test.  After 7 years of inhaling and exhaling exhibition design and technology, installing exhibits, studying and profiling our audience, shifting our curatorial paradigm, deconstructing tired museum frameworks and de-colonizing any defunct exhibition approaches, we ourselves may get jaded and 'syiok sendiri'. I must confess, I used to inherit such reclusive 'syiok sendiri'(donno how to translate la!) syndrome when it comes to 'exhibiting', especially when I was in my 'visual artist' mode. Such mode basically makes one like to think that everyone and the whole world owe and got issues with him/her, and that the whole world must really listen to him/her.

Well, forget about such 'artist-centric'. Instead, for the project, we listen to many voices, including the students of AIU, who come from so many different countries all over the world (mostly developing and poor countries). They will be the main feature of the project.

The project is also 'trans-disciplinary' by default, without having to yell or proclaim loudly on a glossy brochure or poster. As usual, we had to converge exhibition design and technology with so many other disciplines of knowledge. Amongst them include curatorial studies, product design, interior design, architecture, new media design, graphic design, communication and information design, audience research, teaching and learning theories (pedagogy and instructional design), mind and creativity, etc.  Oh ya, that self-indulge (if not always insecure) discipline people tend to call contemporary art can also be included la!

So, for few weeks I had to swim and surf in the quantum wave of Al-Bukhary International University's (AIU). Timely indeed, as Ramadhan seems to be the most fitting month to engage in such a wave. When certain parts of the brain are silenced, other more productive parts will flow like a running water. Ideas, after all, are quantum entities. They are infinite and abundant.

As usual, I had my MGTF design and technical team to assist, plus, our God sent practical students from UNIMAS and UiTM. We went into 'full throttle', from initial concept, to doodles, thumbnails, sketches, drawings, schematic and technical drawings, visual composites, artist's impressions, to 3D models. With our 'ciput' third world studio, we can't deliver virtual walk through though, even though we would love to do it.

I started by working on few conceptual frameworks or theoretical models through a series of visual diagrams and conceptual maps. From there I worked on creating the brand concept and image, followed by a series of sketches outlining several modular, open-ended and integrated design system for museum and gallery exhibition.

The brand name of the project is OASIS at AIU. OASIS here stands for "Of Art and Science Inspiring Sustainability". 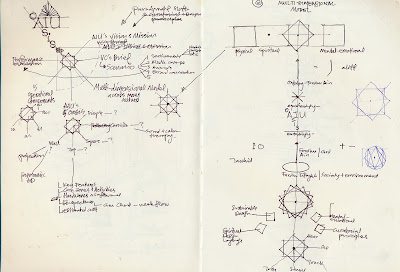 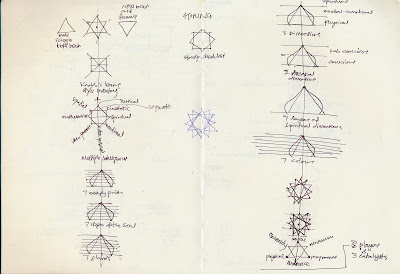 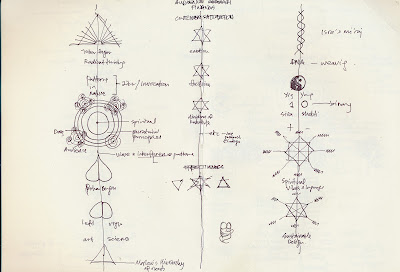 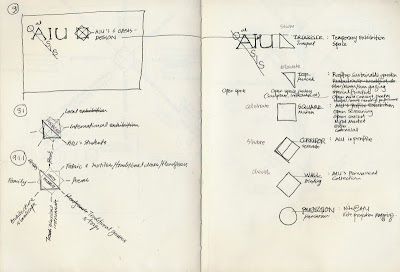 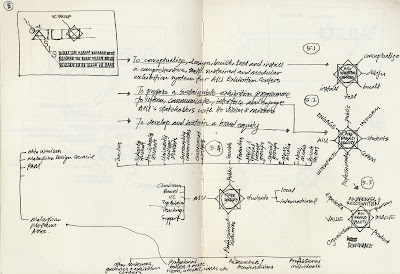 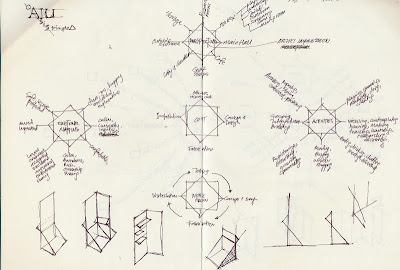 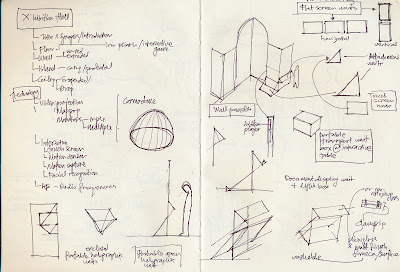 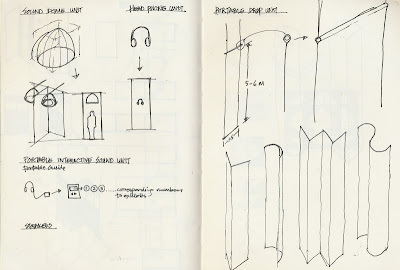 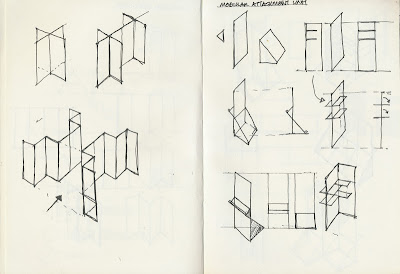 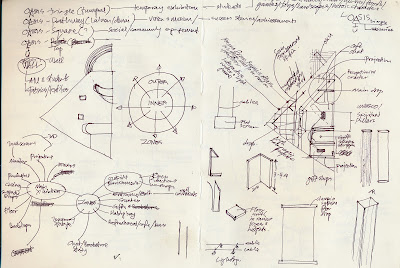 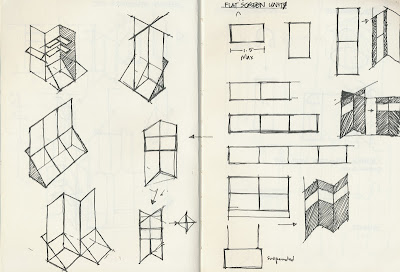 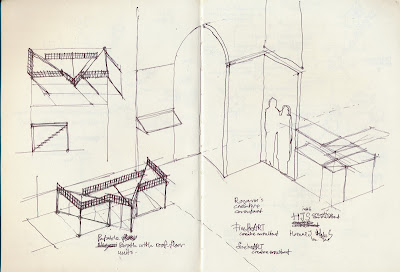 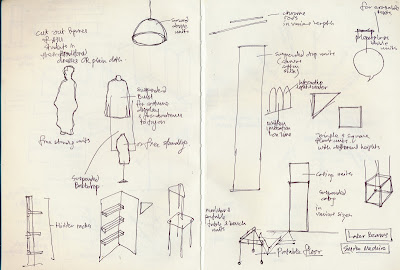 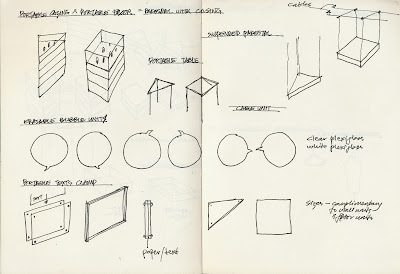 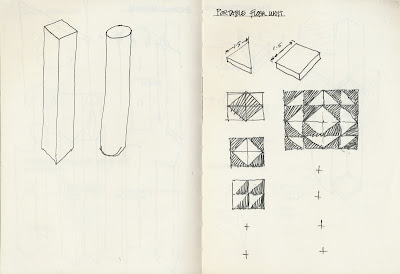 The proposed exhibition is my interpretation of AIU's notion of 'humaniversity', sustainability, unity in diversity and the gardening of the spirit, mind and body. I was inspired by AIU's international students (felt like I was in the United Nation) and its cross-cultural vibes. Such vibes will be the main feature of the exhibition. AIU students will be involved pro-actively in the whole project, while my role as a designer or visual artist will be negated or even shifted to as an 'instigator' and 'facilitator'.

Central to the proposed exhibition are selected seminal poems by seminal poets from all the countries that the AIU students represent. These poems will be written and recited in many languages, hand writings, and various forms, including as a form of reflected shadows on walls and floors. AIU students will select, write, and recite their poems. Audience can interact with these poems in several different ways, thus making them integral parts of the space. They can even add their own favorite poems, thus making the exhibition open-ended, organic, living, breathing and always changing. Amalgamation (or interferences) between these poems (taken as quantum waves) and between the poems with the audience will create the overall visual and aural ambiance of the exhibition space.

I propose a combination of water element with ripples (infinite quantum wave patterns of interference) and reflections created from its interplay with both natural and artificial sources of lights. In most parts, the audience members or visitors will be the 'pro-active performers' and contributors of the visual and aural ambiance by interacting with the water and light elements. I have to admit that this idea came as an extension of my own personal work, especially the recent "Veil of an Artist".

Before I bore everyone with my lecture on Quantum Physics meets Eastern metaphysics meets Islamic art meets Cybernetic meets Brain Studies and Information Theories bla,bla,bla......., here are few samples of my preliminary sketches. 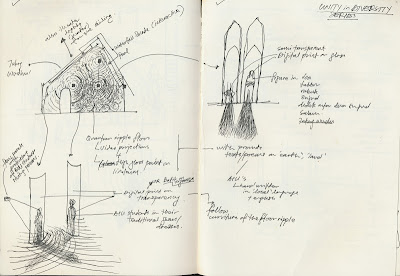 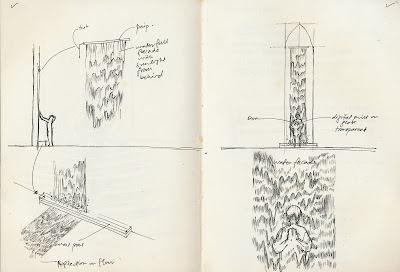 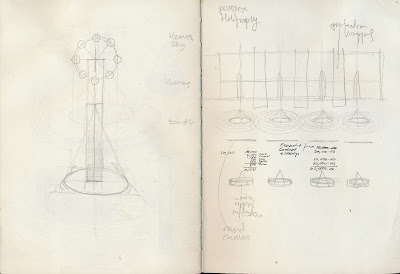 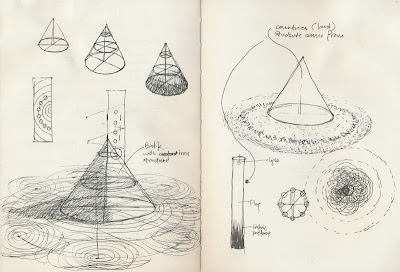 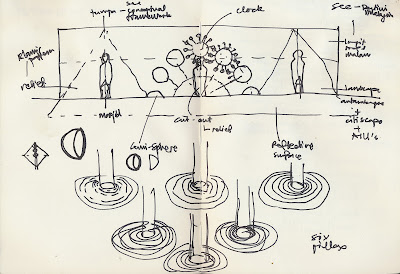 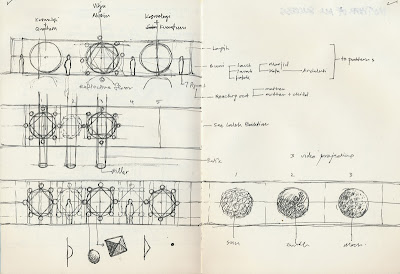 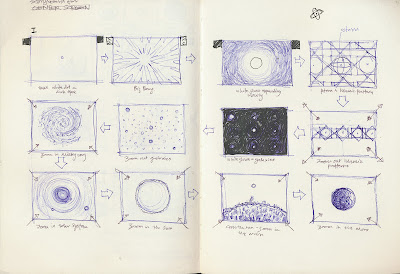 Perhaps, I can share some of the follow-up visuals from this preliminary concepts and sketches, for those who r interested.

Will keep all (especially my students) informed of the progress.