One of the highlights of my recent visit to Bandung for the International Seminar on New Media Art in South East Asia (July 1, 2013) is certainly to meet Krisna Murti, a pioneering figure of video and new media art in Indonesia, and the key person behind the seminar and mapping project for new media art in South East Asia, other than the persistent, kind and hardworking Agung Hujatnika.

I have known Krisna Murti and his works since the late 1990s but was so lazy to pursue him personally. I saw his seminal work 'Sangiran Man" in the collection of the Fukuoka Asian Art Museum when I was there for three months during my researcher-in-residence sojourn in 2003. I have in my keeping his book, "Video Republik", and his power-point lecture on video art in Indonesia (forgot who gave it to me, maybe Rizki Zailani). Some of my students had used both materials as their references. I also saw his picture with Masnoor Ramli (video artist from Malaysia) when he came to the opening ceremony of my joint-exhibition with Niranjan Rajah "Re-location" at the Singapore Management University in 2007, a partner-exhibition held in conjunction with the ISEA 2007 (International Symposium of Electronic Art), curated by Roopesh Sitharan. (see http://hasnulsaidon.blogspot.com/2011/04/relocations-electronic-art-of-hasnul.html) Both Niranjan and I were not able to be there. I had to fly to Brunei Darussalam for a seminar, while Niranjan was too busy with his duties at the Simon Fraser University in Vancouver, Canada.

During the seminar in Bandung, like a true 'sifu', Krisna gave a solid presentation on new media culture in Cambodia, answering probing questions with casual ease, but not without biting back. Despite providing a rather clear definition of new media in his paper by referring to Christiane Paul, new media art curator for the Whitney Museum of American Art (New York), there was an interesting question from the floor on the problematic word 'new'. In fact, Agung Hijatnika had also problematized the term in his presentation before Pak Krisna, while interestingly insinuating the capitalist 'meta' framework behind new media technology, and the fallacy of subscribing to the linear (if not modernist) notion of progress (which may make new media art in South East Asia appears to be 'late' in history). 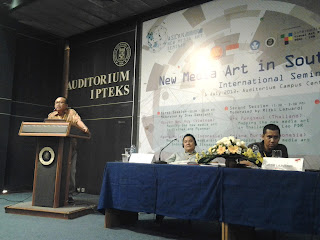 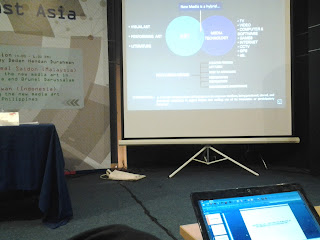 The debate reminded me of similar polemic when I was developing a new fine art curriculum at UNIMAS during the late 90s, or when I was propagating e-art in Kuala Lumpur around the same time. It also reminded me of the 'epistemological predicament' of new media, presented by Roopesh Sitharan during the recent "Aliran Semasa" seminar at the National Visual Art Gallery of Malaysia, Kuala Lumpur June 2013, right before I flew to Bandung. Roopesh refers to the predicament as 'it'. I call 'it' New Media Enigma. Roopesh's paper requires another blog entry. My take on such predicament is to look into our own traditional epistemological framework based on a quantum model. But that also, requires another blog entry. For the time being, lets focus on Pak Krisna first.

Here are excerpts from his paper:

"New media art is a hybrid of the arts - visual art, performance, literature - with media and information technology."

"New here encompasses the creative process, the form of the work, the way it is appreciated, presented, and distributed until its maintenance and storage."

"One of the characteristics of new media art is interactivity, and that indicates 3 things: first, the art form is an event (interactivity), second, the position of the artist as facilitator, while the audience is positioned as participant, and third, all of that is in a process which is continuously unfolding, immaterial and ephemeral."

His presentation interestingly titled "New Media Art In Cambodia - Between Its Bitter Past and Media Culture Euphoria" is well-structured, while his paper gives a rather comprehensive overview of the situation surrounding new media culture in Cambodia, not just the practice of new media art. It provides a pertinent historical setting and several key events in the development of Cambodian visual arts scene. The paper also covers several forms of media culture encompassing television, cyber and social media usage, application and public consumption. All are discussed as a part of what Neil Postman refers to as 'media ecology', with many case examples, facts, figures/numbers to provide a clear picture of such ecology. The only lingering regret on my side is that he didn't have enough time to present the works of six digital photography artists, seven video artists and one sound artist who are practicing in Cambodia, listed in his paper. That would be interesting. In fact, he delineated his view that artists normally respond to media culture outside the common, daily and applied usage of the technology.

During Q&A sessions, Pak Krisna also probed into the imperative of reading and approaching new media art practice beyond the confine of gallery-based and fine art paradigm, into a trans-disciplinary field of cultural studies, visual culture and media ecology that may encompass other disciplines. Such probing echoes similar sentiment and positioning of new media art proponents around the world.

Then, there was a discussion on the generational gap between the radio-television generation as represented by Pak Krisna and the present generation of new media users and subscribers. In the case of Pak Krisna's generation, there was a 'critical distance' in approaching new media. In comparison, the present generation approaches the technology with total immersion or identification with one's sense of self-identity and social interactions, without too much of critical distance. Again, the discussion echoed similar predicament discussed during the "Aliran Semasa" seminar in KL, in which a review of primary data or statements and answers by several key new media practitioners of current generation in Malaysia to probing questions by Yap Sau Bin, reflects how new media technology has been 'personalized', if not 'customized' according to the expressive needs of individual artist. In regards to Pak Krisna, he responded by explaining the need to embrace the paradox of new media (perhaps like a double-edge sword that can be used or abused for good and bad simultaneously). He deployed the term 'critical' or 'criticality' in approaching new media, perhaps not much different than my own preferred term - 'reflexivity', taking from Ismail Zain's "Digital Collage' (1988) theoretical framework.
There were also presentations on New Media Art in Vietnam, Thailand and Indonesia and Singapore, not to mention my presentation on Malaysia and supposedly Brunei Darussalam. The keynote speakers - Nguyen, Ark and Agung have provided me with important insights of such practice in the South East Asian region. There are several intrigues and enigma surrounding new media art practice in the said region. Perhaps their presentations can be discussed in other entries.

Of course, I look forward for the completion of a planned publication of a book on New Media Art in South East Asia, based on the seminar papers. Which reminds me that I have to finish up my draft paper on new media art in Malaysia and Brunei before the end of this month.

To avoid from being too abstract and theoretical in discussing the enigma of new media art, given below are excerpts from Pak Krisna's statement for his recent work called "Tripang of Pulau Pasir" and his solo show "Art After Drama - Solo Video Show by Krisna Murti", to be held in Salihara Gallery, Jl. Salihara 16, Pasar Minggu, Jakarta, this July 2013. 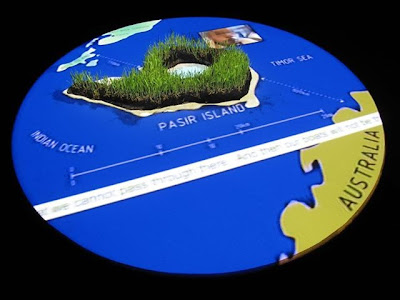 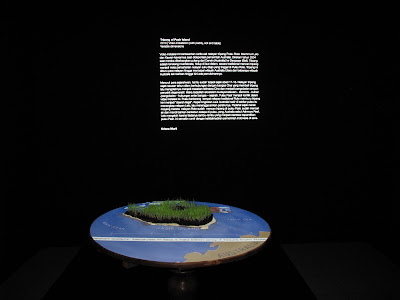 
This video installation is based on a true story of a tripang (sea cucumber) fisherman from Rote Island: Machmud Lelo and his friends when they were deported by the Australian government.  It was recorded in 2004 when they were flown home from Darwin (Australia) to Denpasar (Bali).


Tripang is an invertebrate which lives in the deep sea, and which has traditionally been a source of livelihood for Bajo fishermen who live on Rote Island.  Fishermen hunt for tripang as far as Northern Australia and various other regions in Australia, and until today they even have settlements there.  According to historians, that has been going on since the 17th-18th centuries. For hundreds of years, tripang fishermen have had relationships with Chinese who buy the tripang and process it to become special Chinese food and medicines effective in treating degenerative diseases. So a cultural ecosystem developed: marine-economic-culinary/medicinal – cross cultural relation – history.

Pasir Island became the conflict in this video installation.  This coral island where traditional Rote fishermen hunt for tripang has now become an “illegal area”.  Australian Navy ships arrive near the island to capture the fisherman Lelo, and then sink his boat. From the time of their ancestors, the fishermen of Rote have been hunting for tripang on Pasir Island, searching for water and bathing there, and also planting coconut trees on this island which Australians call Ashmore Reef.  Lelo complains because there are no markers as guideposts to signal the identity of the ownership of Pasir Island.  This gets more complicated as there is no Indonesian government presence there.

Excerpts from his solo show description

...yet Krisna Murti's art transcends drama itself. His videos do not offer sequential stories as understood in classical drama. He provides us with a fragmented collection of bodily gestures, presented by performers, as though defying the law of space and time; in addition to discourses on the problems of representation and imitation, the real and virtual, within art. For this exhibition, Krisna has worked with a number of artists: Gita Kinanthi Purnama Azhri (dancer), Eve Wulan Smereczynska (Polishtheater artist), YR Landung Laksono Simatupang (theater artist) and Hanna Fransisca (poet).

Krisna Murti is a video/ new media artist who has been pioneering in this field in Indonesia since 1990. He has held more than 35 solo show, and has participated in Havana Biennale, Gwangju Biennale, Fukuoka Asian Art Triennale, Osaka Biennale, Yogya Biennale Jogja and Venice Biennale. He also has taken part in new media festival such as Impact (Utrecht), Transmediale (Berlin) and in ZKM Center for Art and Media (Karlsruhe) 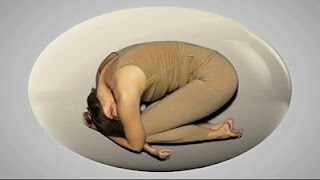 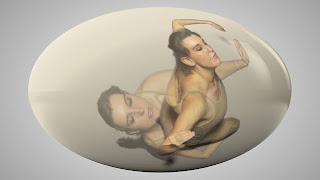 To add spices, here's a link to my solo of video projection/mapping on painting and interactive light and media art at http://hasnulsaidon.blogspot.com/2011/04/veil-of-artist.html
Posted by Hasnul J Saidon @ Kebun Jiwa Halus at 12:41