THE STIGMA & ITS REMEDY 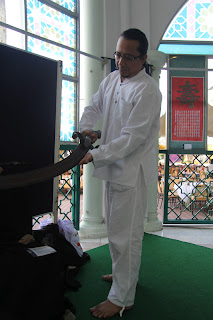 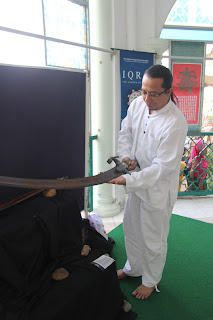 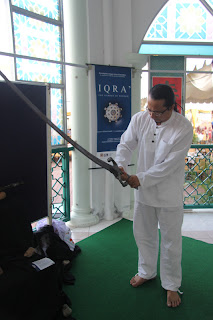 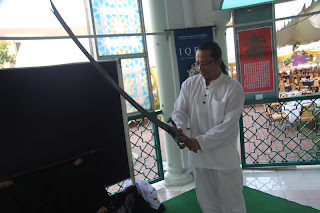 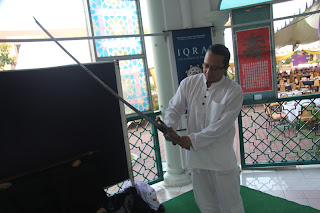 It is very frustrating and sad to witness how Islam and Muslims have been stigmatized through many different ways (both implicit and explicitly) as 'the problematic others' and terrorists (or potential terrorists). Their homes and countries have been saturated by the media to be read as 'zones of conflict' if not, 'axis of evil'. Islam is alleged to be a religion that breeds 'terrorists' amongst its adherents of many different races or ethnic groups around the world. Much of the mainstream media discourses appear to have no qualm in painting such a picture of Islam and Muslims.

To a certain extant, even showcasing  traditional artifacts from the Islamic world such as a 'sword' or a 'dagger' (keris in Malay) can be negatively read as "hey, look, here come the Muslims with their swords and daggers to terrorize us non-believers again!"

In Malaysia, the diverse historical, philosophical, metaphysical, social and artistic contexts of keris have unfortunately been 'deconstructed', mostly by a narrow, ethno-centric and politically-driven discourse. From being read as a beautiful art meets science manifestation of inner wisdom, creativity and fine artistry meant to protect the quantum field of its user more than to 'attack and kill', it has been at times relegated to a confused, diffused and reused semiotic interplay of 'Malays (or UMNO) wanting to fight and become the hero for Islam, Muslims and the Malays'.

As much as it is convenient to blame the 'Western media' or some sections of non-Muslim societies at large as the culprits of such stigmatization and representation, those who claim themselves as Muslims and Malays (in case of Malaysia) had, at times, themselves to be blamed as well.

This brings me back to Andalusia, even though I prefer not to reminisce and romanticize the past just for bragging.

There are many lessons that can be learned from Andalusia (8th. to 13th. centuries), where the mastery of science, the arts, technology and economy were highly regarded then. Intense scholarship and transmission of knowledge were prevalent.

It was a period typically and ironically described by some prominent scholars as 'a time that was dark and barbaric' - 'medieval', 'Dark Ages' (500-1500) - unenlightened, backward, irrational, full with sword-waving intolerant fanatics ready to kill in the name of religion, a notion that is at times, propagated and attached to Islam and Muslims all over the world.

For those who don't subscribe to such notion above, Andalusia, together with Cardoba and Baghdad were the centers of knowledge. Works by Aristotle, Euclid, Galen, Hippocrates, Ptolemy, Plato and Socrates were translated. Scholars, poets, philosophers, historians and musicians from many faiths (including Jewish scholars and poets) gravitated towards Andalusia. Learning was emphasized and the philosophical discourse on reason and faith was encouraged. Intellectual wealth was created, other than commercial wealth, productivity and exchange. There were wealth of deep and reflective thinking about the meaning of life, God and material things. There was a high level of religious tolerance, openness to learning, peace, prosperity and social freedom, with Christian students in large number came from all parts of Europe then.

There was this Bayt al-Hikmah or House of Wisdom established around 828, with its vast public library, astronomical observatory and a bureau of translation (to translate manuscripts from the Greek for example). Medical texts of Galen and Hippocrates, Euclid's geometry and Ptolemy's astronomical writings were translated into Arabic.

Those who are sober enough not to fully subscribe to the 'dark age' or 'medieval' notions of such period, are familiar with Mohamed Ibn Musa Al-Khwarazmi (mathematician), Al-Idrisi(geographer), Abu al-Qasim Al-Zaheawi (surgeon), Ibn Rushd, Abu-Imran Musa bin Maimon, Razi, Biruni, Ibn Sina and Omar Khayam and many more whom I can't recall, before their names were 'Europeanized'.

To all my Muslims brothers and sisters, lets pray that Ramadhan this year brings us back to the spirit of Andalusia, to such web of knowledge, to a learning culture that nurtures all of us holistically. Let us re-interpret Andalusia to recreate our own unique version of new and contemporary intellectual beacons, as our contributions to the world, to our fellow friends (of other faiths), and to humanity at large.