This essay carries my casual observation and reflection of the works of Haslin Ismail, Syafiq Ali’am, Abdul Latif Ahmad Padzali, Al-Khuzairie Ali and Haris Abadi Abdul Rahman. Due to limitation of space, and for the sake of brevity, this essay only gives a broad overview and contexts of how I read their works.
I came to know this group of prolific young artists for the past few years, especially through their group show called “Outerinter-X” at the Threesixty Art Development Studio in 2009. Their works have been shown in several group exhibitions in Malaysia. Some members have even won awards, while their works have been purchased by individual and institutional collectors.
By common standard, they can be considered as promising, if not successful young artists with a bright future ahead.


I look at them and their works as representative of the post 2000 generation of contemporary artists in Malaysia. Somehow, their 3 dimensional repertoires appear to stand out in comparison to the more commercially popular (if not tame and lame) paintings or 2 dimensional works that have been churned out by their peers.
Probably, this is due to the bold, raw and experimental nature of their approach, if not their outstanding craftsmanship and formalistic flair. Their works also exude a sense of commitment, persistent, patient towards intricacies and almost manic concentration. The fact that all of them were trained at the renowned Faculty of Art & Design, UiTM is reflected by such approach, craftsmanship and flair. Professionally, and in regards to the practice of exhibition and publication, the group can be read as a product of Threesixty Art Development Studio.
The emergence of this group of young artists has to be read in tandem with the  larger matrix of contemporary art practice in Malaysia, especially post 2000. Arham Azmi, the curator for their “Outerinter” exposition, relates their emergence as a group to the mushrooming of ‘indie’ musicians in Malaysia. Their initial exposition is signified by Arham as a desire to produce works beyond the convention of traditional fine art practice, with an added X factor to indicate the spirit of exploration, experimentation and expression. Issarezal Ismail, a guest writer for the same show, touches on how these artists and the supporting Threesixty Art Development Studio had to negate the dichotomy of mainstream (as in commodification and commercialization of art practice) vs alternative in positioning their works. In short, they desire to propose a paradigmatic shift and new stimulations to the local art scene, a rather lofty aim if I may say so.
For me, the place of these artists has to be seen within the context of what I refer to as ‘under-deconstructive’ stance of the local contemporary art practice. Some would refer to the stance as being in a constant flux and fragmentation. Flux has to do with the element of change, implied interactivity and motion in their works, while fragmentation refers to the hybrid nature of their working strategies.
Their works can also be read in relation to one of the most popular socio-political catchphrases in Malaysia today  - ‘transformation’. This catchphrase is often used in a very linear sense in tandem with the common notion of scientific and technological progress. Such politics of transformation unfortunately, does not necessarily yield desired outcomes. Instead at times, it may lead to deformation, if not, pardon the pun, ‘thrash- formation’ (perhaps, in reference to the use or re-cycle of ready-mades industrial wastes or assorted junks by the artists). In fact, deformation or even ‘thrash-formation’ may not be an alien notion if one can relate to the ironies, paradoxes, contradictions, as much as clashing probabilities, possibilities and potentials that define the contemporary art practice in Malaysia today.
Upon closer look, one may trace the lingering notions of deformation and ‘trash-formation’ in the works of Haslin, Syafiq, Abdul Latif, Al-Khuzairie and Haris. Further reading unveils that even the notion of ‘modernism’ itself, especially in regards to what constitute a conventional sculpture, appear to be teased, tested and expanded, if not deconstructed and re-collected to unveil new ways of approaching sculpture as a discipline. 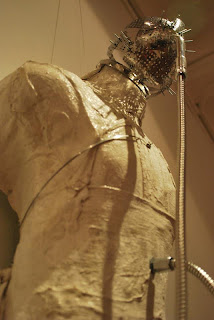 There is a subtle indication of a shift from a sole reliance on the master narrative (if not dominance) of painting to multiple discourses of hybrid and intersecting multidimensional forms. Nevertheless, despite the posture of boldness, rawness and experimentation, their works still conform to the language and nuance of gallery-based modern art practice.
On the other hand, their sentiments and themes seem to explore beyond the confine of ‘Malay proclivities’ in the local art scene (often attributed to UiTM graduates by several writers), bleeding into the domain of universal human psyche, inner conflicts, knowledge and power, environmental concerns, cloning, mutation and genetic engineering, robotic, sustainability, rapid industrialization, the impact of virtual communication and cybernetic technology. 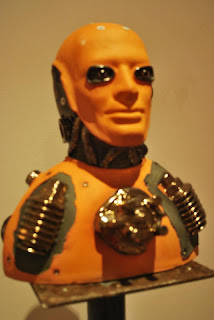 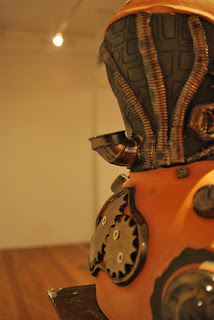 They appear to respond to the social and cultural impact of machine and technological age with a hint of ‘post-human’, ‘post-body’ or ‘post-biology’ catastrophes.  Their works are a repertoire of ‘future-shock’ so-to-speak, imbued with a somber and gloomy sense of loss and disappearance of humanity in the frantic midst of scientific and technological progress.  There is also a touch of dark parody and surreal absurdity embedded within their hybrid and mutated deformation or ‘’thrash-formation’ of books, humans, animals and everyday objects. 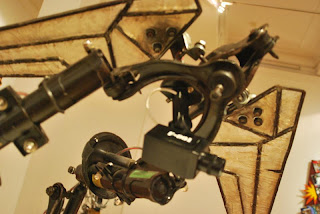 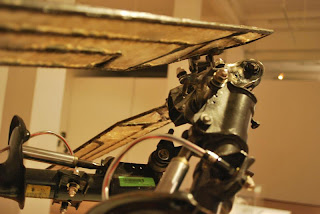 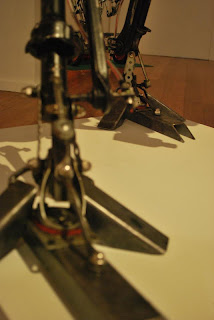 At times, I suspect that there is a smell of fetish attraction towards things weird, abnormal and illogical – perhaps an often obscured mental and emotional landscape of a country so eager to transform (if not deform) herself into a world-stage. Perhaps also, similar sentiment can be traced in the interest of these young artists in transforming (if not deforming and ‘trash-forming) their careers beyond the confine of national boundary.
Hasnul J Saidon
Director,
Muzium & Galeri Tuanku Fauziah (MGTF), Universiti Sains Malaysia (USM)
March 2011
Posted by Hasnul J Saidon @ Kebun Jiwa Halus at 20:57